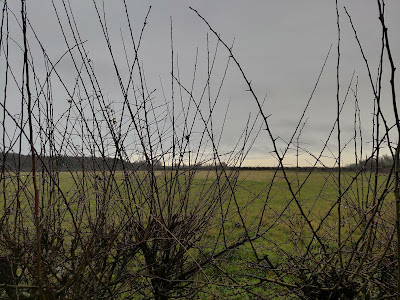 I took a walk in the rain through part of the Rising Sun Country Park today. It’s an odd feeling to emerge from an industrial estate, dash through a gap in the ASDA-bound traffic, and find yourself in this expansive almost-rural setting. It’s bordered by roads, houses, car showrooms and supermarket car parks, but you’ll still see bullfinches and bramblings bustling about in the hedgerows, and white egrets fishing in the secluded lakes. Walking through it mostly feels like taking some country air, except along the boundary near the Station Road entrance, where on the other side Persimmon are building their bland houses. As I stopped to view the progress, I spotted a pair of jays in the hedge on the hunt for haws, quite unconcerned by both my lurking presence and by the sounds of construction from the other side. The murky light had the effect of dulling their peachy pink breasts and azure wing badges, but it was still a pleasant surprise to see them outside of the woods, and realise that they weren’t the magpies I had at first taken them for. They made no warning call, and quietly disappeared when I started moving again. The building site was once a farmer's field, and the hedge here is old, showing signs of having been laid many years ago: vertical branches would be hacked half-through, bent downwards and woven through stakes to form a dense living fence.

No doubt the construction work has been subject to stipulations and box-ticking around tree planting and habitat creation, and a sign tells us that Persimmon are working with “an ecologist” in respect of the lapwings that were found to have been nesting in the field. What that work would involve is hard to say: the habitat is surely gone now, or drastically shrunk. I do wonder if purchase conditions should also apply to prospective residents; a prerequisite of taking a slice of this land could be that the owners promise never to pour concrete over their gardens, lay fake grass, erect garden rooms, or contribute to light pollution. Maybe the people that will live here would appreciate knowing that they have stewardship of somewhere special, and that it’s their job to try to keep it that way.

Mitigation is really the whole story of the Rising Sun. The colliery here closed in 1969, and the large hill at the centre from which you can see all of Newcastle and North Tyneside was the slag heap. Plantings have had to take account of whatever lurks beneath the topsoil, and much of the woodland was initially formed of row-planted lodgepole pines, a North American species which does well on poor soil. I wonder if the experimental forestry techniques used here were influenced by the establishment in the 1920s onwards of the vast Kielder Forest in Northumberland, in which lodgepole pines were also used to claim the land from boggy heathland. The result anyway, is that a great deal of the park is taken up by non-native trees - but that doesn't seem to bother the crossbill finches which have recently been spotted here (not by me, sadly).

Back on the other side of the 40 limit road, I noticed that the boundary with the industrial estate is also an old hedge, many years away from its last laying. A different hedge-layer must have worked this field, because here the hawthorn has been laid down flat, horizontally to the ground, to create what must have been an impenetrable thorny barrier for whatever livestock was once kept here. On the inside of it, a spiked security fence now does the job of keeping humans out instead. 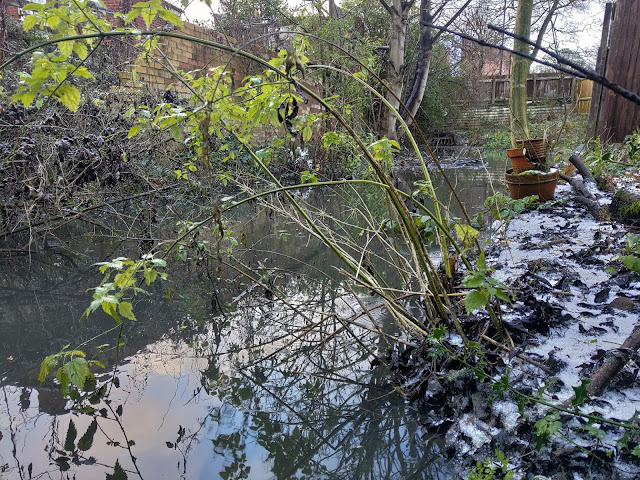